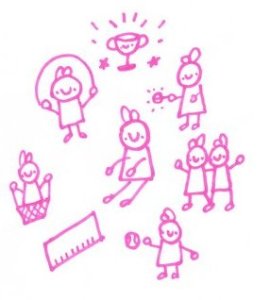 It was Lil’ D’s sports day last week, and I jumped at the chance to cheer on our Lil’ Champ. Expectations were high, thanks to reports from the practice field and the day got off to a good start: rain free!

Having arrived with Lil’ D’s daddy, things looked good as she registered that one of her aunties was present.   A loud exclamation to her friends reverberated across the field- it’s my auntie! Cue everyone turning to see said auntie.  I love surprising her, though it’s ridiculously hard to do, as she will often claim she knew already… psychic dote?

But things went gently down hill from there, not disastrously so, but still… It started with the teacher in charge.  And IN CHARGE is what she was, we friends and family were told in no uncertain terms to stay behind the white line, which we did, somehow forgetting to cheer the little ones on in their quest for- glory?

Still, Lil’ D sprinted (though she may have misinterpreted this to be a stroll) and egged and spooned (I was later told that I didn’t need to cheer as she wasn’t going to win that one anyway) her way to the finish line.  The throwing event was where to place the real money on our Lil’ D though- practice events had shown that her winning form from the year before was back, just at the right time.

Before that though was the sack race, and as the brave girls of P.3 lined up, Lil’ Dancer made the decision to retire.  Well the poor wee dote was sick from all the running around in the hot sun, and instead of glory we all went home… or rather we went for ice cream while the rest of the school continued oblivious!!!  You know. To cool down.

Gotta love having a good excuse to eat ice cream.  Hee.  Do you know, I quite enjoyed Sports Day?

And thanks to a toy kit of sports day equipment, the throwing competition was held at a later hour.