In the interests of keeping the Book club interesting for us Aunties we are trying to pick books we can all enjoy.  With this in mind may we present Witch Wars. 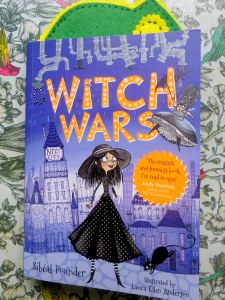 Witch Wars is the first book in a series about Tiga Whicabim.  Tiga has been living with Miss Heks since she was dumped in her sink as a baby.  Miss Heks is not very nice and makes Tiga eat cheese water for dinner.  Yuck.  This unusual arrangement hides the fact that Tiga is a witch, and as she has now hit nine- years old, Fran the fairy has come to break the news and have her compete in Witch Wars, in the land below the pipes, where witches live, of course.

Witch Wars is the biggest reality TV show below the pipes, and Fran (the Fabulous) Fairy is it’s host, and the exploits that follow play with witch stereotypes and invent a few myths of it’s own.  Of course witches still cackle, make potions, and have warts (wouldn’t you if you travelled by sewer pipe?) but did you know they are extremely fond of jam? There are characters galore and plenty for TIga to learn on her way to winning, and perhaps getting to stay below the pipes forever.   Oh and ruling over witches for the next 9 years, until the next Witch Wars.

Witch Wars is fun and fast paced.  The language is straightforward enough for a keen 7 or 8 year old to read, but we’ve decided to have Eims reading aloud while Bear and Lil’ D bring the action to life.   It may take longer to read, but it can’t fail to win Lil’ D’s attention!